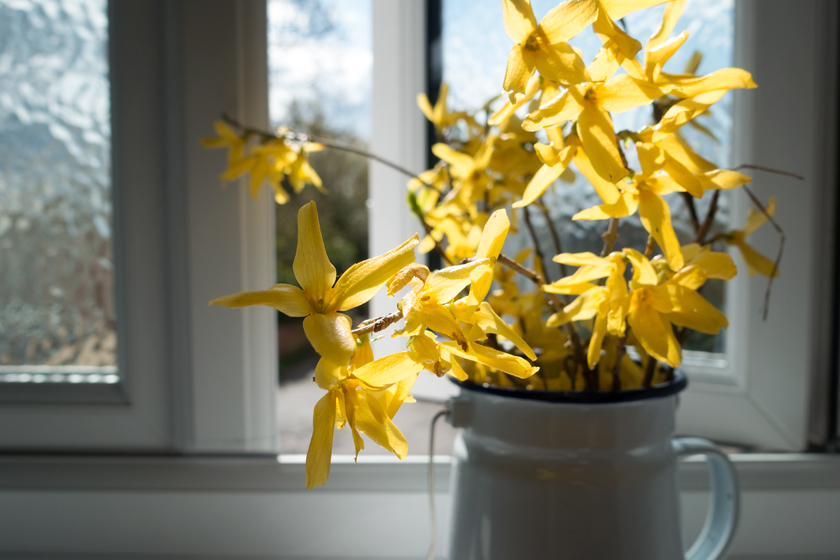 April has been a good month. Spending more time at home has been a welcome change and I’m thankful I no longer have a slow commute to work every day. I thought I’d be getting up early and making trendy things like avo toast for breakfast each day instead — hah, who am I kidding? I like my sleep. And when are avocados ever ripe when you actually want to eat them!? As well as enjoying more hours in bed I’ve also been motoring through our to-do list, trying to reach the point where we are sorted. Here are some of the more blog worthy parts of the month…

Egg mayo sandwiches. A freshly boiled egg with a tiny bit of mayo and some chives from the garden. It stinks the house out; thankfully it tastes better than it smells. I have to take half the yolk out because I can’t stomach it in big chunks or runny (curse all those nasty runny eggs on Instagram!).

Other things we’ve been enjoying are:

I’ve been reading Yokes by Kate Davies. Yokes isn’t not your typical pattern book; it contains interviews, photos and essays about the history of yokes, as well as eleven patterns. I loved learning about Kirsten Olsson and her amazing colourwork. One day a Blue Flower jumper will be mine!

Derek Jarman’s Garden was a Christmas present but I’ve only recently got around to reading it properly. I say ‘read’ but it was mostly nice photos. Derek created a colourful garden around his fishermans cottage on a shingle beach in Dungeness. Sadly I don’t think it’s open to visitors anymore, so the book is the next best thing.

All the things! April has been an industrious month and its been nice to get back outdoors. So far I’ve sown: broad beans, butternut squash, borlotti beans, runner beans, marigolds, nasturtiums, basil, little gem lettuces, sunflowers, chillies, onions, sweetcorn, potatoes, peppers, cosmos, sweet peas and wild flowers for the bees. Everything apart from the borlotti beans have germinated.

This sweet pea was grown from seed I saved from the garden last year. I’m proud and amazed they actually grew.

That’s all for April.