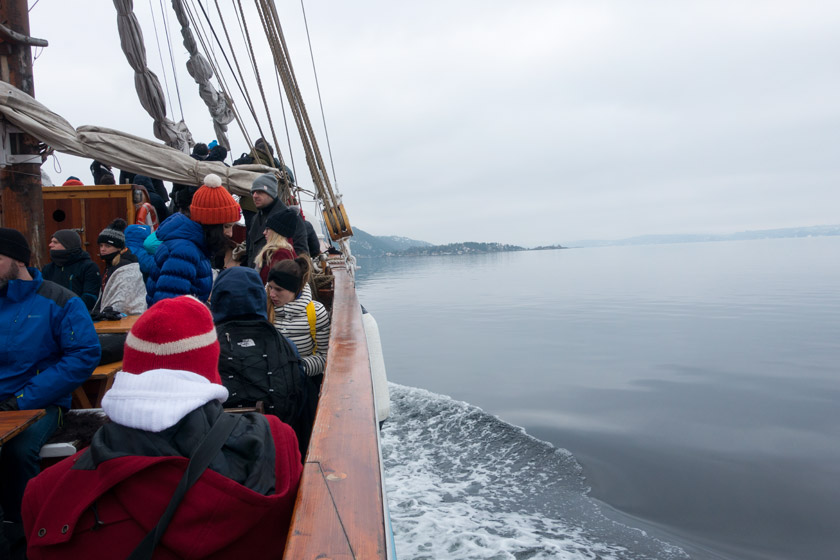 It has occurred to me that I never finished spamming you with our Oslo adventures! The day after our epic walk from Frognesetern we decided to go easier on our bodies and take a boat tour around the Oslo Fjord. The fact that it was March and there was still snow on the ground in places didn’t put us off. Are we mad? Probably.

First thing in the morning we headed down to the Båtservice booth to buy our tickets for the ‘Fjord sightseeing’ tour. A boat trip was at the top of our list of things to do but when we booked our trip it didn’t occur to us that it might be too early in the season. Thankfully this one runs all year round. Our tickets cost us 285 NOK each — around £22.

Our table was the second one from the right on the front row 🙂 Yes, seating is outside even during the Winter! There was a small indoor bar further to the right but if we’d spent the whole time in there we’d have seen nothing. A big pile of fleece blankets was put out for anyone requiring a bit of extra warmth. 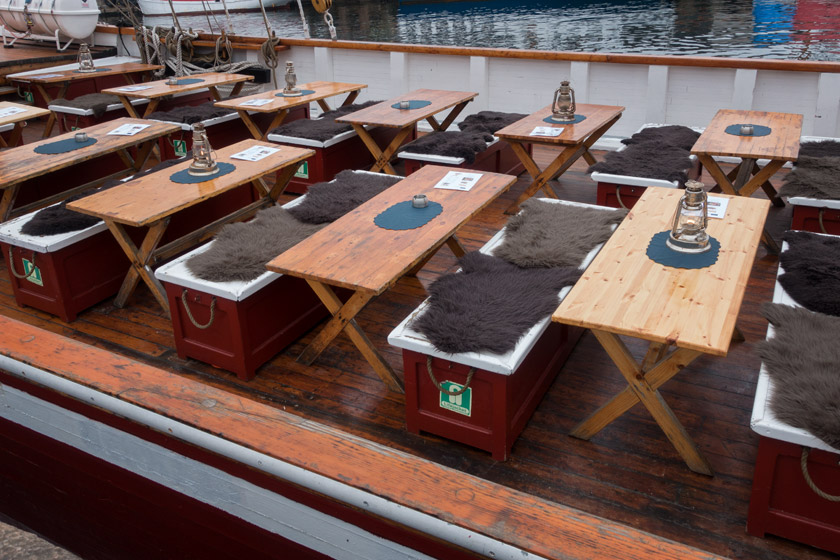 During the Winter months this tour is not for the faint hearted. The temperature on land was zero, it was considerably colder on the water. Thankfully we’d wrapped up well. One of the bonuses of being a knitter is you’re never short of wooly items! 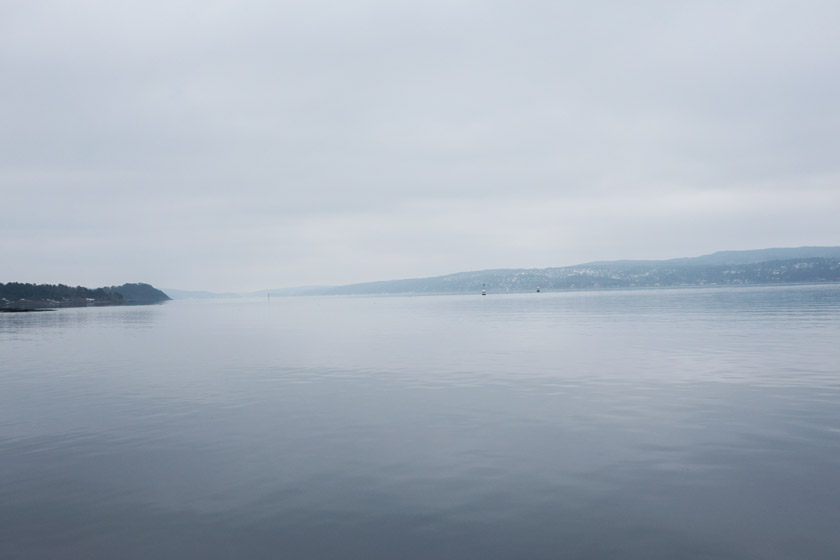 We sailed past a few landmarks along the waters edge in central Oslo but my favourite part was being out on the open water away from the city. It was bleak but incredibly beautiful. Our hazy view into the distance revealed blue shorelines and trees with muted water and sky. It really was this grey, it’s not dodgy photography. Getting clear photos was quite hard because they packed a lot of people onto the boat (hate to think what it would be like in the Summer) so I didn’t get as many as I was hoping to. 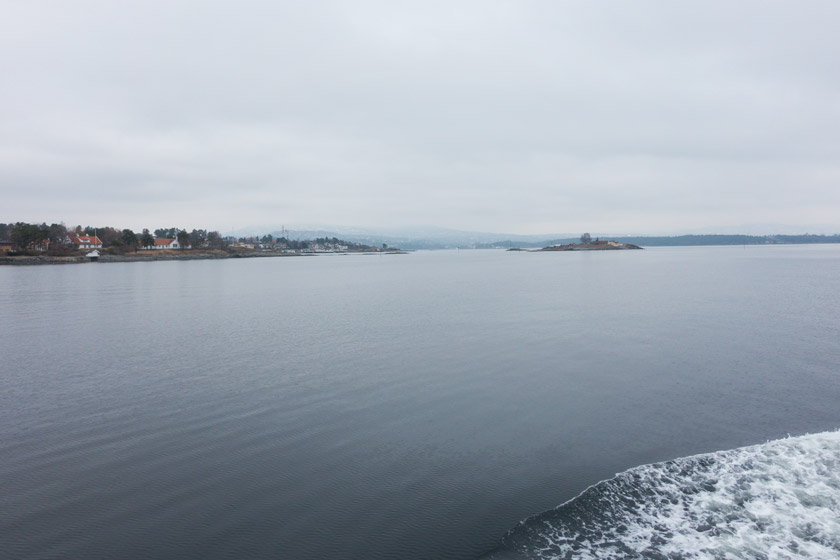 Although this wooden building looks like a church, it is in fact Heggholmen Lighthouse. It was built in 1827 and sits on the Northern point of the coastline on Hoggholmen island. The tower on the top houses the fog bell and the lantern is located under that little roof. One of my favourite landmarks on the tour.

There are lots of these little islands dotted around the fjord. If I could sail I’d like to go from island to island exploring. 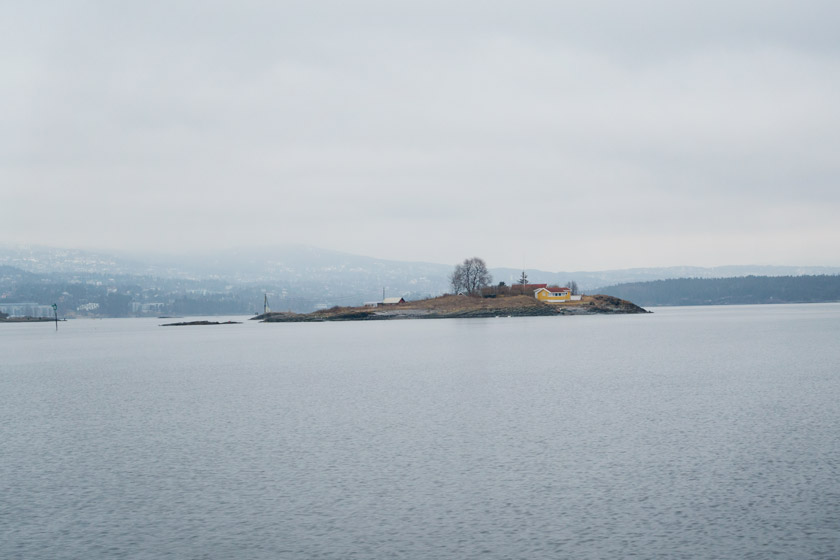 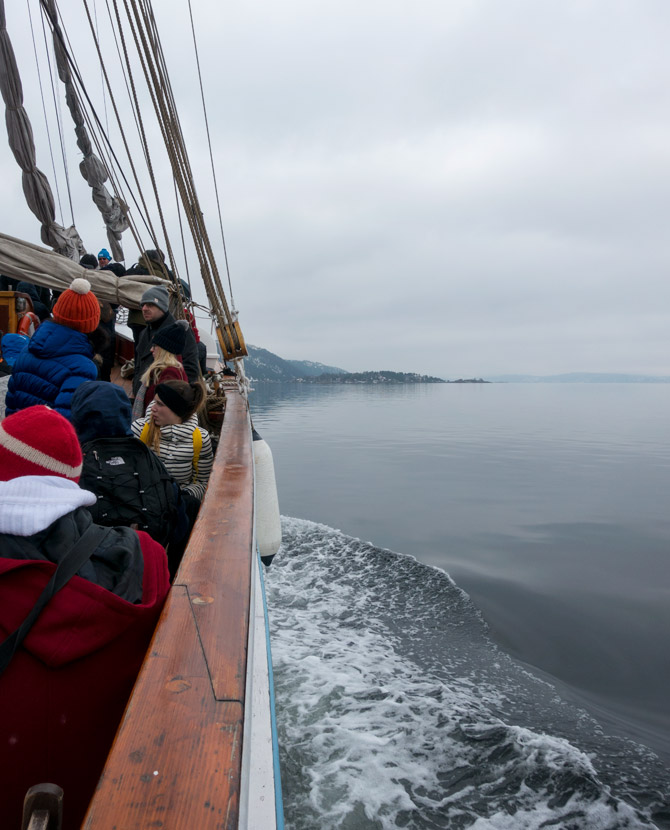 Half way round we started to get a bit of a nip on. So Scott went to the bar and ordered a couple of hot chocolates with whipped cream. I have a theory that everything tastes better outdoors in the fresh air; I don’t know whether that’s really the case or not but our drinks were exceptionally good! 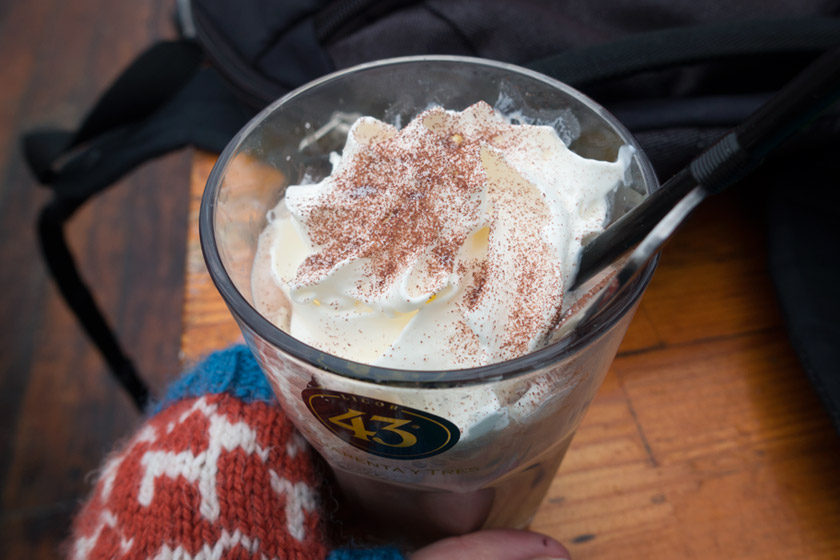 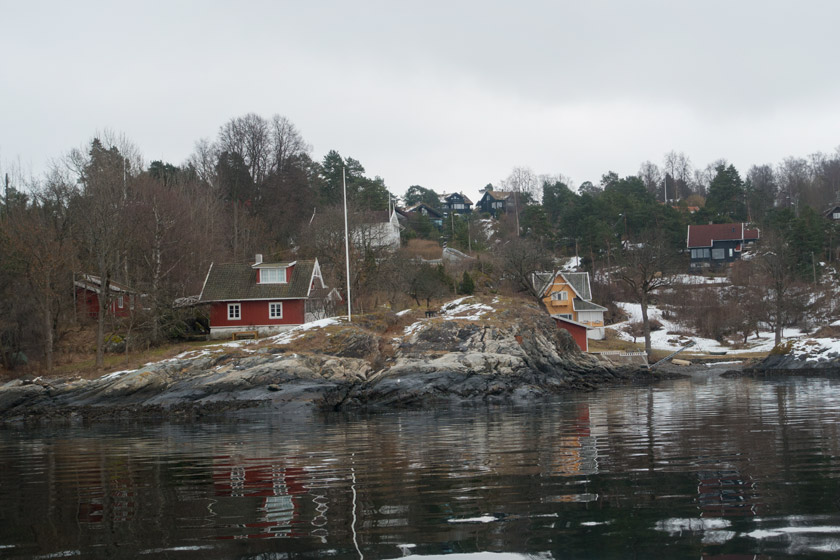 At times we sailed very close to the shoreline (considering how large the boat was) and it wasn’t long before we saw lots of wooden Summer houses like the ones below. I don’t know if that is the correct name? But anyway, each house has a Summer house at the waters edge, which provides a route down to the waters edge for a swim and space up top to towel off and relax. I’d love to visit during the Summer and rent one! Lake swimming somewhere like this is on my bucket list. 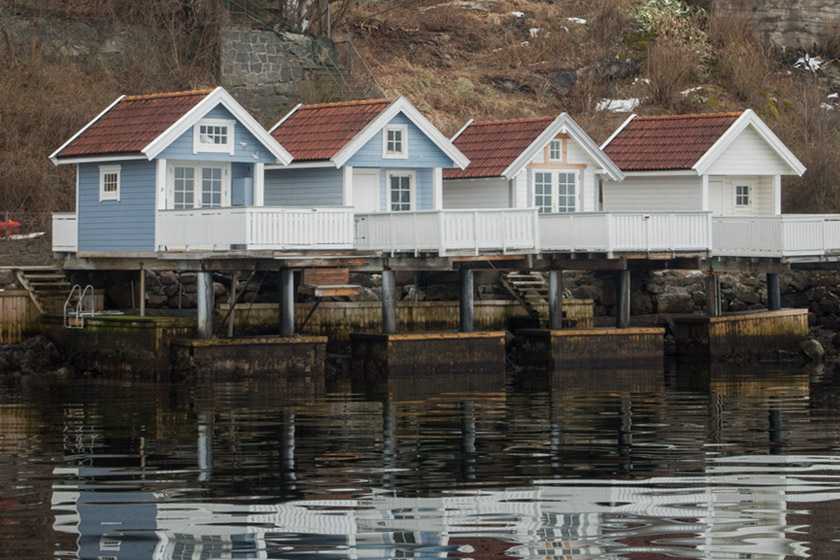 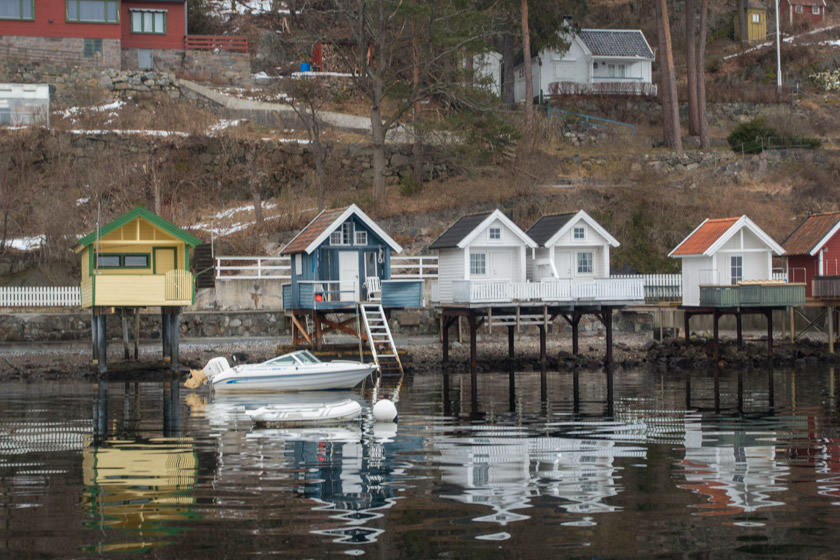 We didn’t get as close to the mountains as I would have liked but to do that I think would need a different tour. Part of this expectation was down to our amazing tour of Monstraumen fjord in Bergen. Seeing all the traditional wooden houses was nice though and the hot chocolate was brilliant, so all in all it was a success. But after sitting still for two hours our legs had pretty much frozen into position and we felt like we had ice forming on our organs so we headed into the city for a big lunch at Cafe Sara before thawing out properly in Oslo Botanical Gardens.