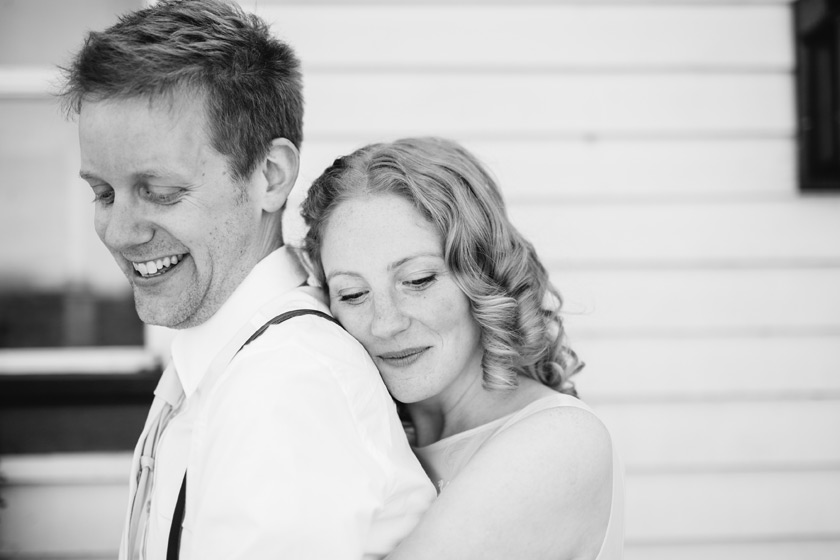 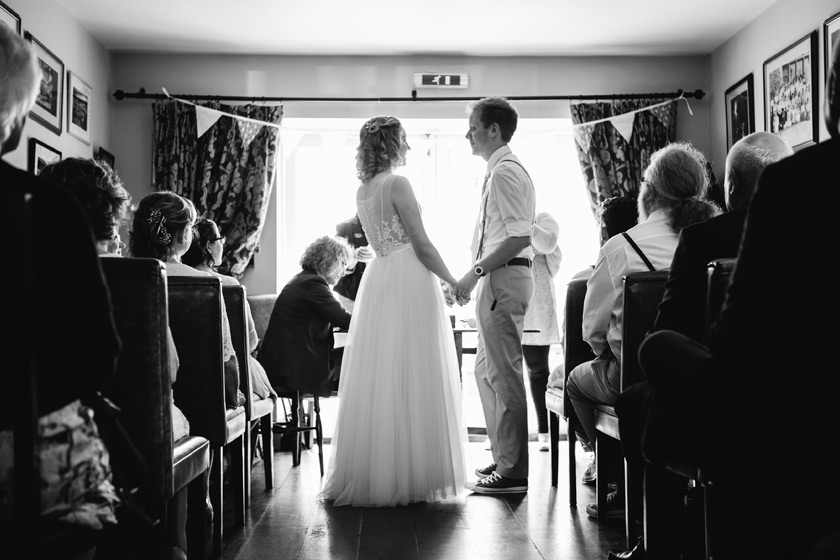 Our wedding feels like such a long time ago already but in reality, only six weeks have passed. I didn’t post anything during the lead up to the big day but since then I’ve been itching to tell you about it; we just needed to wait for the photos to arrive. Now they have. All 757 of them. Don’t worry, I won’t make you sit through that many! 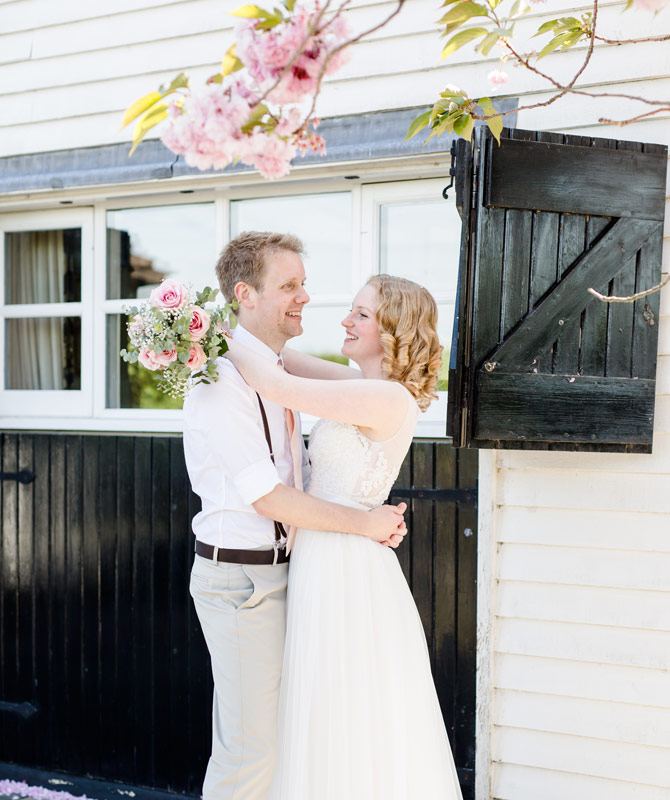 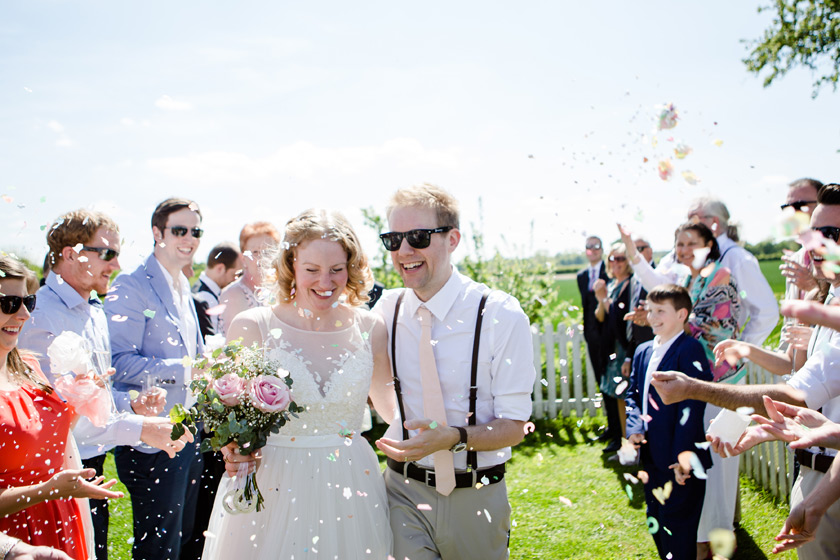 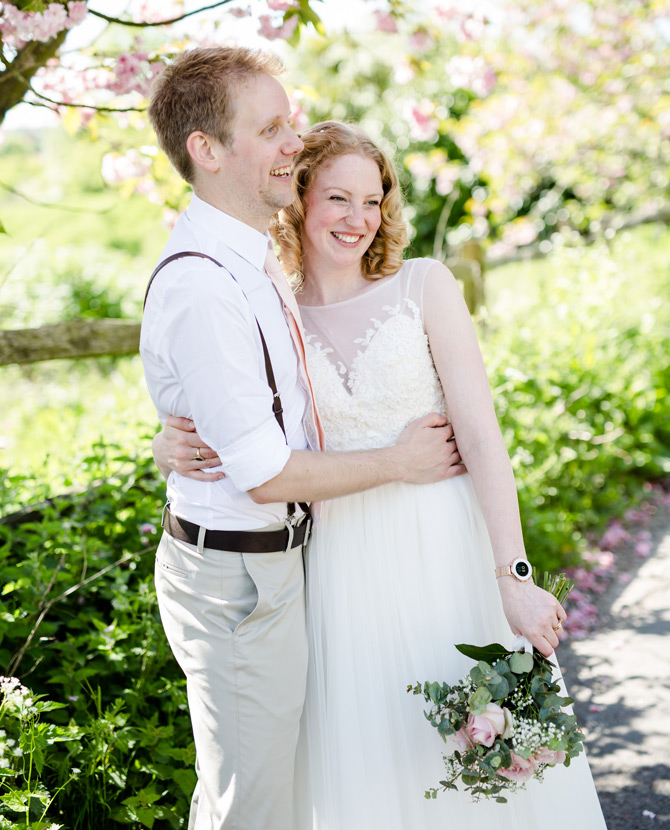 I found reading other people’s blog posts about their weddings really useful when planning ours, so I thought I’d share a few bits too in case they are helpful to someone.

Two things at the top of our list for the day were for it to be relaxed and to eat good food (which is why we chose an old pub). We actually had a longer list of things we didn’t want which included suits, uncomfortable shoes, anything too formal, lots of makeup, traditional top table, fruit cake, dress with a train, too much mushy stuff, prawn cocktails/melon balls and mostly importantly, no first dance.

Making all the things

We made pretty much everything; table settings, flowers, name cards, favours, cake topper, seating plans, photo booth etc. There was a lot to do but we started early and in the end it wasn’t that stressful. Besides, you should know I love a good project by now. Our living room was a couple of feet shorter for six months because we had to move the sofa forward to stash everything behind it.

These name holders were made from last years Christmas tree. We cut each one, sanded and seasoned it with olive oil. Name cards were made from Grass Paper; a recycled paper mixed with grass manufactured in the UK. This paper was used for everything from confetti bags, to seating plans and truffle cones.

We found this frame on eBay and used it to make our table plan.

Scott doesn’t like fruit cake and I don’t like icing. Traditional fruit cake was out of the question. We really fancied a naked Victoria sponge cake and as luck would have it, I was walking past North Street market in Guildford one day and saw a cake stand advertising just that!

Our cake was made by Butter and Cream Cakes and we had one raspberry tier, one blueberry and lemon tier. We made the cake topper out of wood from our old Christmas tree and burnt the motif on using a pyrography tool.

Our wedding rings were handmade in Cornwall by a man called Tom Richardson. Mine is rose gold and Scott’s is mainly silver with a thin band of rose gold to tie it to mine.

The lovely Lydia Stamps took our wedding photos. Neither of us like having our photo taken but she made us feel so relaxed. All the photos in this post are hers unless I’ve added a different credit. 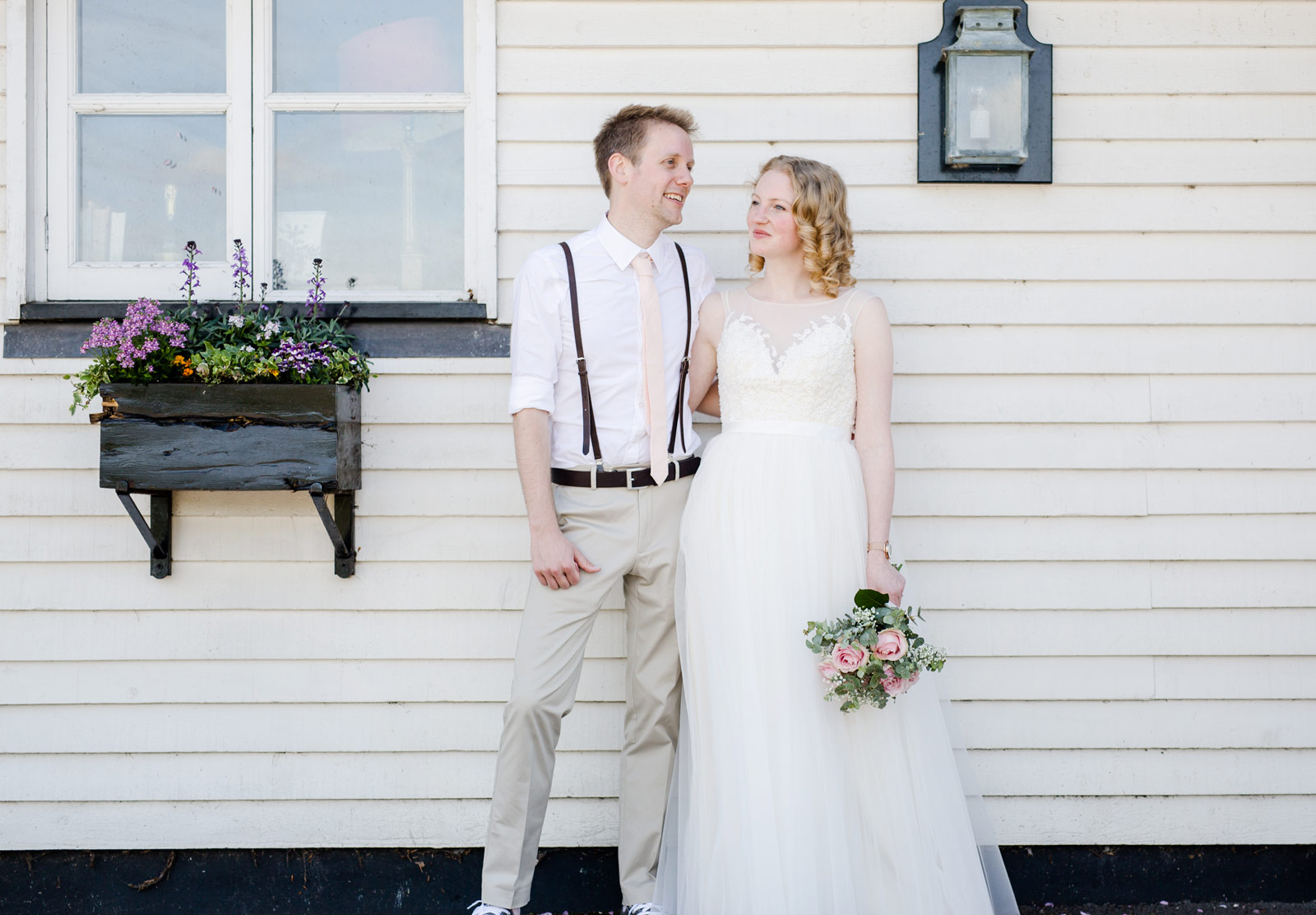 Scott really didn’t want to wear a formal suit. His Mum sent us a photo of men in braces and chinos on Pinterest — a great alternative. 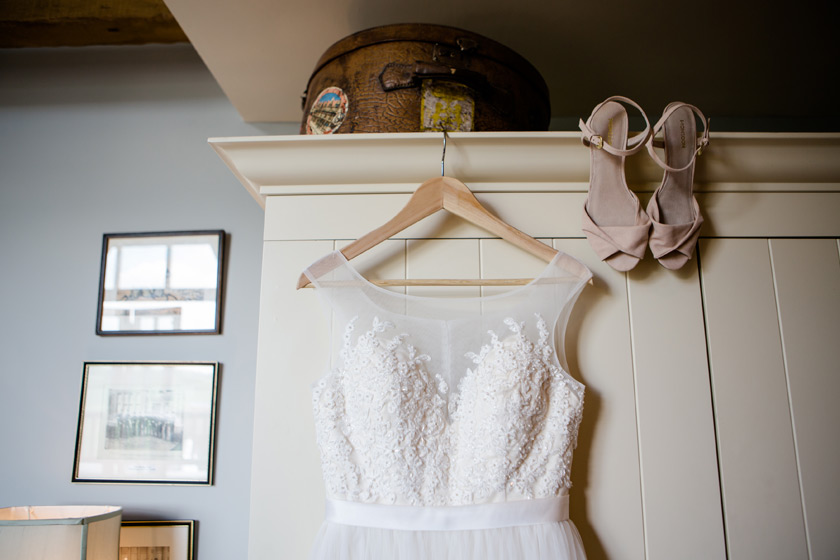 My Mother-in-law discovered the shop I bought my dress from. It’s called Wed2b and everything is priced between £65 and £500 — the dresses are worth more but reduced in price because they are end of season/discontinued. Spending a couple of thousand pounds on a dress was not an option and I know it sounds unromantic but I was only going to wear it once. Both of us agreed we’d rather spend more money on food haha! Priorities 🙂 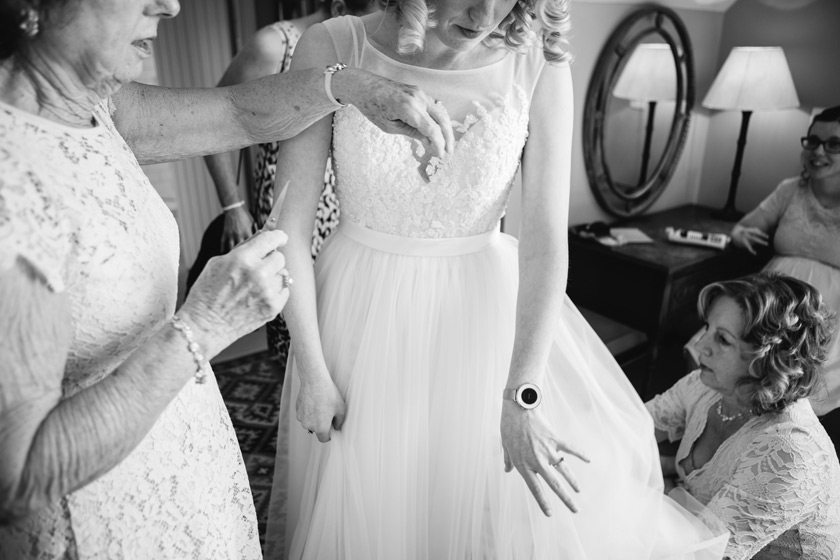 I tried on dresses with my Mother-in-law and Sister-in-law. Six dresses later we’d found “the one” and an almost perfect fit too. A local seamstress shortened the length for me and made a small alteration to the waistband.

Best bit of advice from Scott’s Nan was to bring a small sewing kit with me on the day. And we ended up using it when we found a loose piece of lace on my dress and had to trim it off. Hence why she is wielding a pair of scissors!

I struggled with this. I am not a make-up person at all. But I thought seeing as it was our wedding day perhaps I should wear some foundation because that’s what brides do. I went to a couple of makeup counters and they created a “natural look” for me. I didn’t look like me at all! These places are not good for your self esteem; they point out every imperfection on your face!! So I decided I didn’t want any face goop… or any more self esteem bashing. In the end we did all our own makeup and just wore what we were happy with — which was a naked face and a lick of blusher and mascara for me. 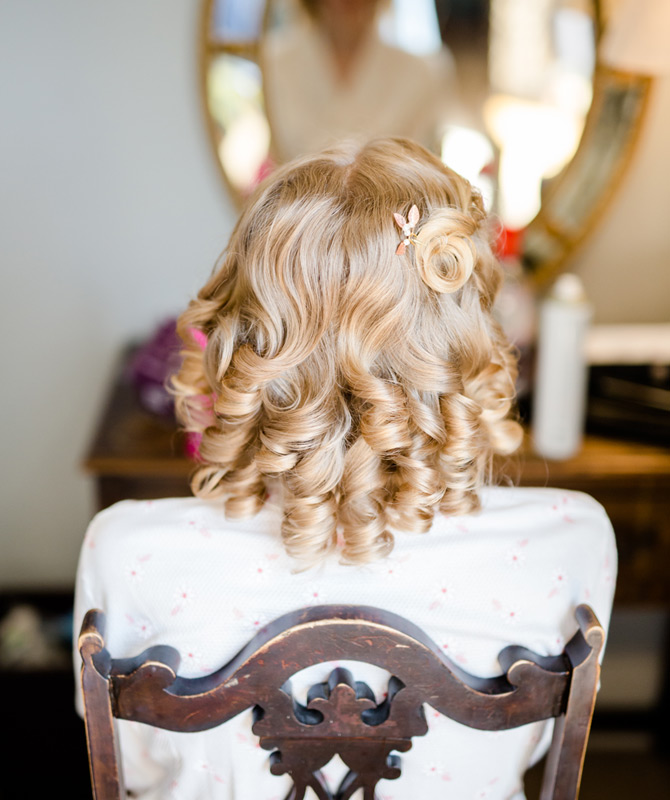 Nicky McKenzie styled our hair, she did a brilliant job. All the rose gold clips came from an Etsy shop called DavieandChiyo. 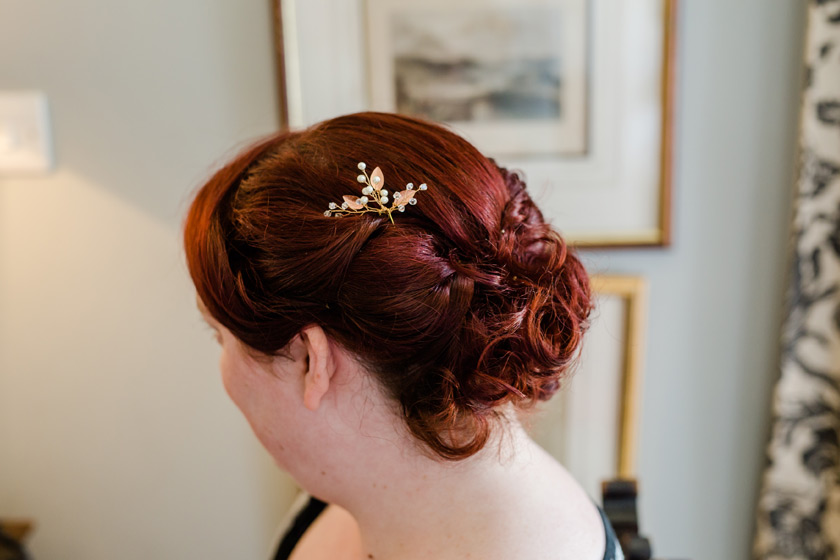 We kept our first dance replacement top secret until the day; a first game. It was a two player game of Taiko Drum Master (we had better music than this example). Two players compete with plastic drums, drumming a beat to Japanese music on screen. Sounds easy but it’s actually really intense! We borrowed a Wii, bought a projector, sourced two Wii Taiko drums and practiced for 3 weeks. We had an absolute blast!! I won by the way! *tries not to look too smug*

Scott worked really hard making a Raspberry Pi powered photobooth for the evening. We bought a load of props including an inflatable shark, glasses, moustaches and a wig. This is Bronti, he’s been with us for quite a few years. 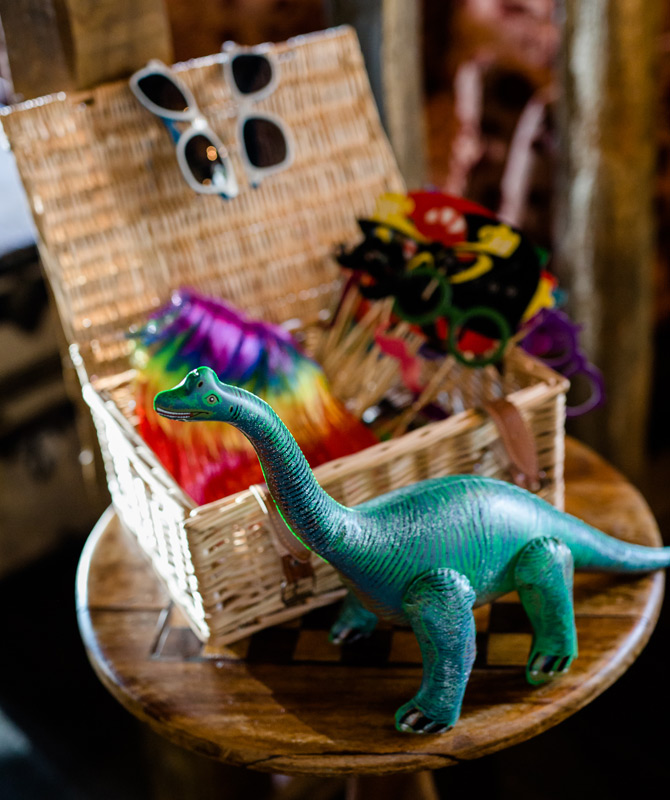 It feels good to finally share some photos. The whole thing was brilliant but went far too quickly, just as everyone said it would. If we were to do it all again I wouldn’t change a thing. We had sunshine, our friends and family with us and plenty of good food. Best of all, ten years after we got together Scott is now my husband. Happy days. 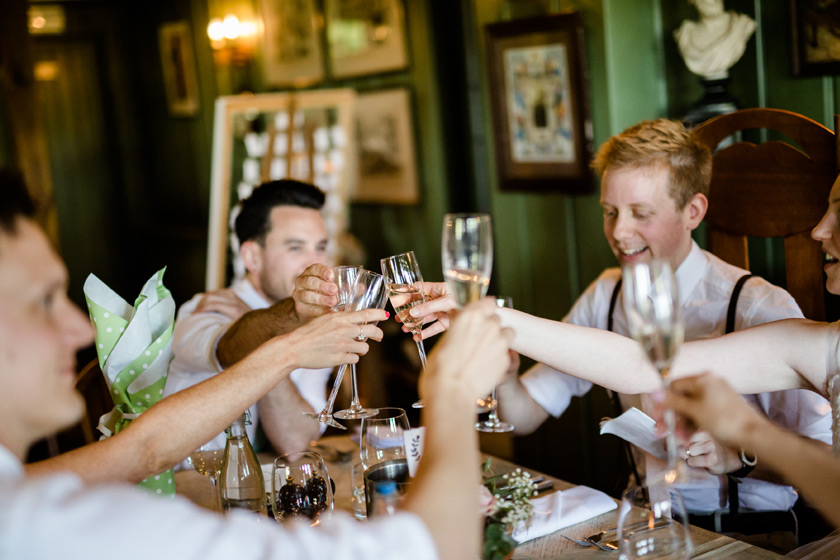 13 comments on “Our wedding day”