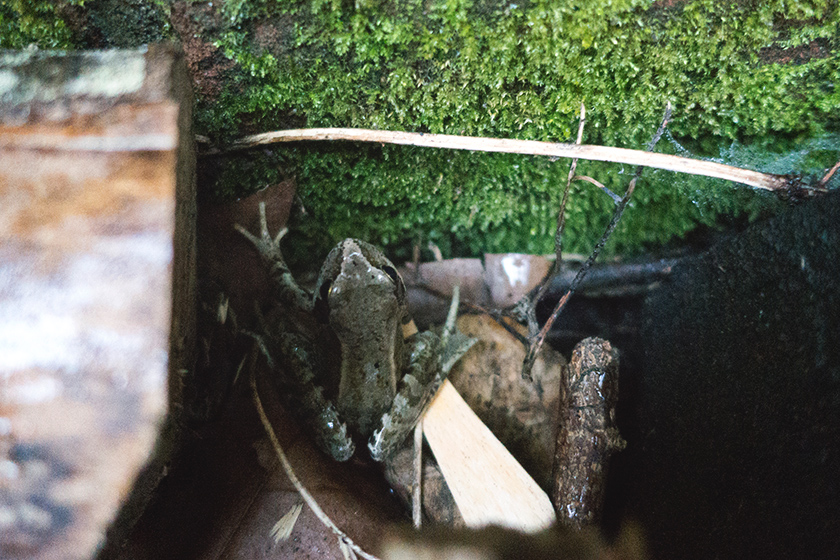 The slug situation became so dire I resorted to going out on slug patrol at night with a torch. I scooped up the fattiest, juiciest ones and took them down the road — killing them is a grim job and I’d rather not do it when they can be food for something else. A rainy evening was prime opportunity to catch some of the little slime bags. As I parted some leaves and something jumped up towards my face! It was a frog!!

I always give things name so I called it Leonard, after Leonard Nimoy. I don’t know if he would be flattered or horrified.

I took some great photos during the day but the SD card corrupted and I lost them all (sob!). Unfortunately this is the best photo I have. Although I’ve heard it jumping around I haven’t been able to get another decent photo.

We’ve made quite a few wildlife friendly changes to our garden and it seems we have unknowingly created frog paradise. While I like a tidy house, I don’t mind a wild looking garden. In fact, leaving plants to grow and leaves to fall creates more homes for nature.

Undergrowth like this is the perfect place for frogs to hide out, stay cool and rummage for slugs. I got the idea of the terracotta frog home from Scott’s Mum — she has one in her garden. Our chilli pot cracked right in the middle so I broke it in two and wedged each half in the soil.

I built a log pile in a damp, shady part of the garden. Originally I created it for fungus and insects but hadn’t realised it would make a good frog home.

This shallow dish was originally mean’t to be a bird bath but it’s more of a frog bath now.

This may not seem like a big deal to most people but it’s exciting news for our small garden. It means there are enough bugs and shelter to sustain larger creatures. Our next mission — hedgehogs! Does anyone have any tips for attracting them?