I started writing this post several months ago, shortly after we arrived in Sweden. Partly because I didn’t want to forget how we felt and also because hearing about our experience may be useful for others. Reading move stories was reassuring and I learnt that fear is a natural part of the process, no matter how excited you are about the journey ahead.

The year of adventure

In 2018, we spent a month in Norway during the Winter, and a month in Sweden during the Summer. We had visited Sweden before this but 2018 was our longest stay and the first one in warm weather.

We returned to the UK with the realisation that we were better suited to the Nordic way of life. And after that, the UK was where I lived but not somewhere I felt like I belonged. It’s an odd feeling and one I can’t really put into words, but if you found this post because you are thinking about moving away from the country you were born in, I think you’ll understand.

Moving abroad was always a someday dream. Maybe when we’re old, maybe when this happens, maybe when that happens. But twists and turns over the last year and a half helped us realise we can’t bank on growing old and saving that time for adventures. Brexit was the final kick up the bum we needed to do it sooner rather than later — it’s not the sole reason we moved but it definitely impacted the timing by several years.

So that was it, we were bloody doing it! We spent the next few months yo-yoing between excitement and fear. Mostly fear at first if I’m honest. Are we mad? Will we be able to learn the language? What if we can’t find somewhere to live? What will people think when we tell them? Will we be able to integrate in Sweden?

We spent weeks talking through big and little worries that popped into our heads, trying to find ways to tackle each one. I think this is a really important part of the process. Don’t ignore thoughts that cause anxiety because you will have to address them sooner or later. Having time to mull things over should help you feel more mentally prepared in the long run, even if you don’t have all the answers straight away.

Finding a place to live in two weeks

We visited Sweden for two weeks at the beginning of the year to find somewhere to live and start admin like speaking to Skatteverket and banks etc. Our rental options were limited without personnummers but we found a couple of agencies that could help (listed below). After finding an apartment, we crammed in an Ikea trip to suss out what we wanted to buy in a few weeks time. Can you tell we were excited? 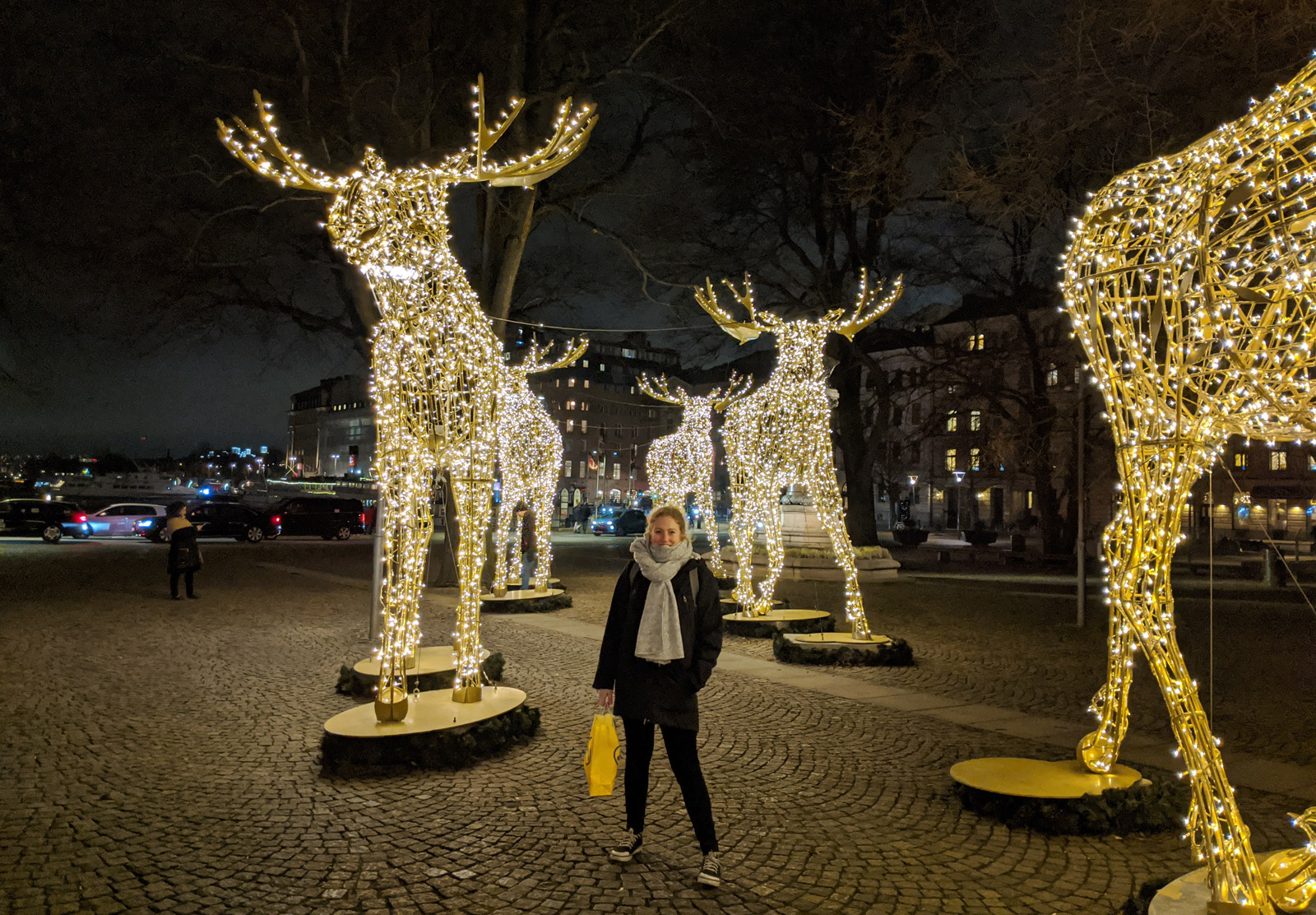 Those two weeks were pretty intense because they were make or break for the timeline we had in mind. We didn’t know it at the time but this gave us one week of post move wiggle room before the pandemic hit. We were so lucky to get here!

Once back in the UK, we worked towards our move date like a pair of trojans. Finally committing to it and working towards a date felt good but working through ~80% of our move to-dos in just four weeks was gruelling.

I occasionally found Scott staring into mid air with a glazed look on his face. It turns out he was making sense of what he called “the world’s largest jigsaw” — the correct order in which to do all the things. 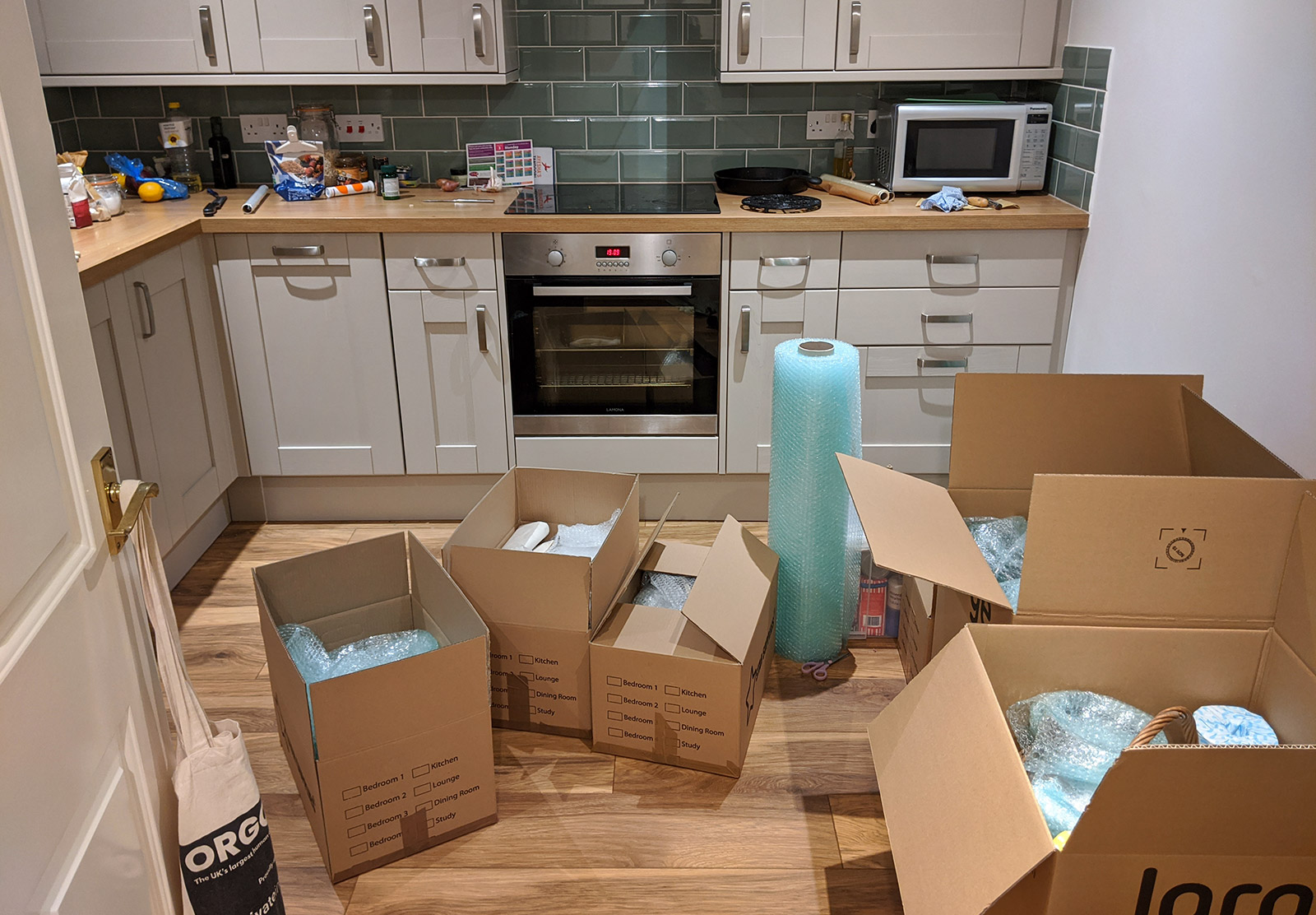 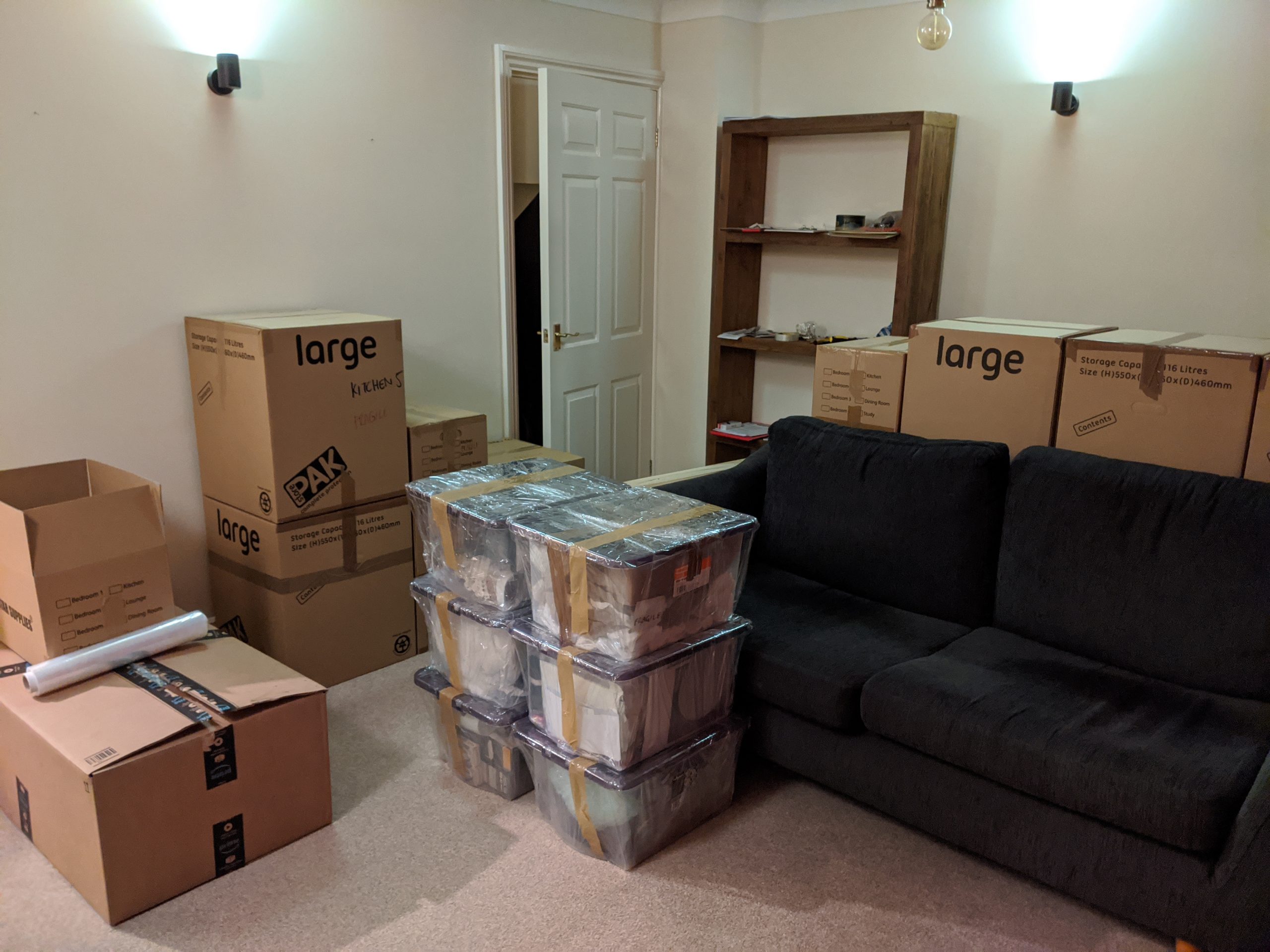 Packing and downsizing is something I wanted to share a few tips on. Start sorting early because it’ll take longer than expected — even if you think you don’t own much. This method/order worked well for us:

Our final week in the UK

The final week was brutal. Our belongings had been collected by the removals company. We ate the last home cooked freezer meals on plastic plates with wooden cutlery — and lived off takeaway once the microwave sold. We were sleeping under one sleeping bag on a blow up bed, had two suitcases each and no car. I was also still working full time from the living room floor. 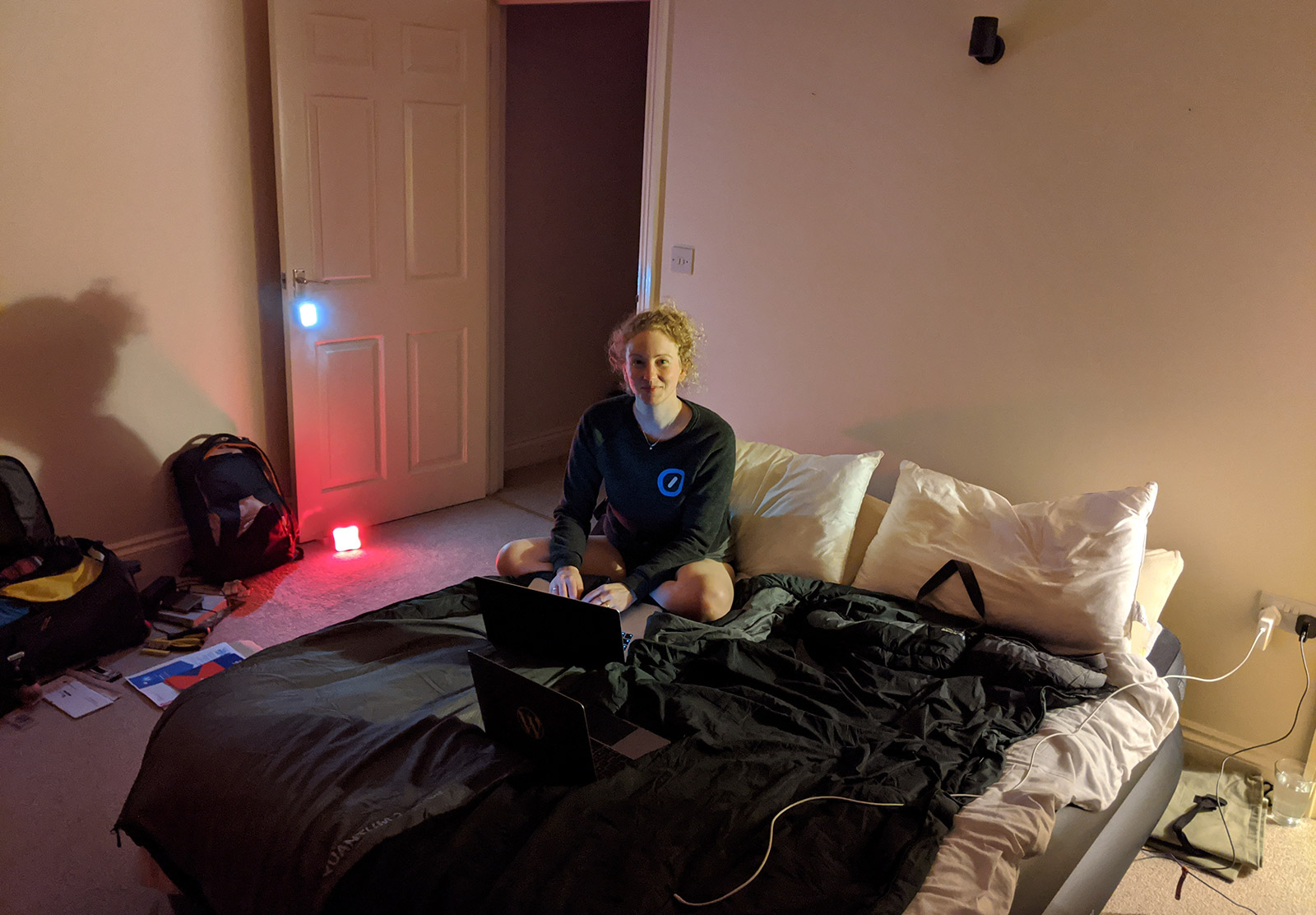 A low point was opening a tin of tuna with a screwdriver because the tin opener was on its way to Sweden. Scott said not to worry but I was determined we wouldn’t be beaten by a tin of tuna. It was the smallest obstacle we needed to overcome at that point.

The last day in our house meant working in an empty living room while we waited for a friend to pick us up. This is Scott “relaxing” without furniture. We had coats on because sitting on the floor of a totally empty house in Winter is quite cold!

A massive thank you to SoPhil for giving us an actual bed to sleep in on the last night, feeding us fish and chips, pouring big glasses of wine and taking us to the airport. It felt like a stay at the Ritz.

Finally touching down at Arlanda was the best feeling in the world. We stayed in a hotel the night before we picked up the apartment keys — giving ourselves time to decompress and as a buffer in the event of a delayed flight.

Opening the door to our hotel room was hilarious. We paid about £20 extra for a slightly bigger room because we had four suitcases between us… it turned out to be much larger than we expected. Separate dining room, fireplace and a four-poster bed!!! 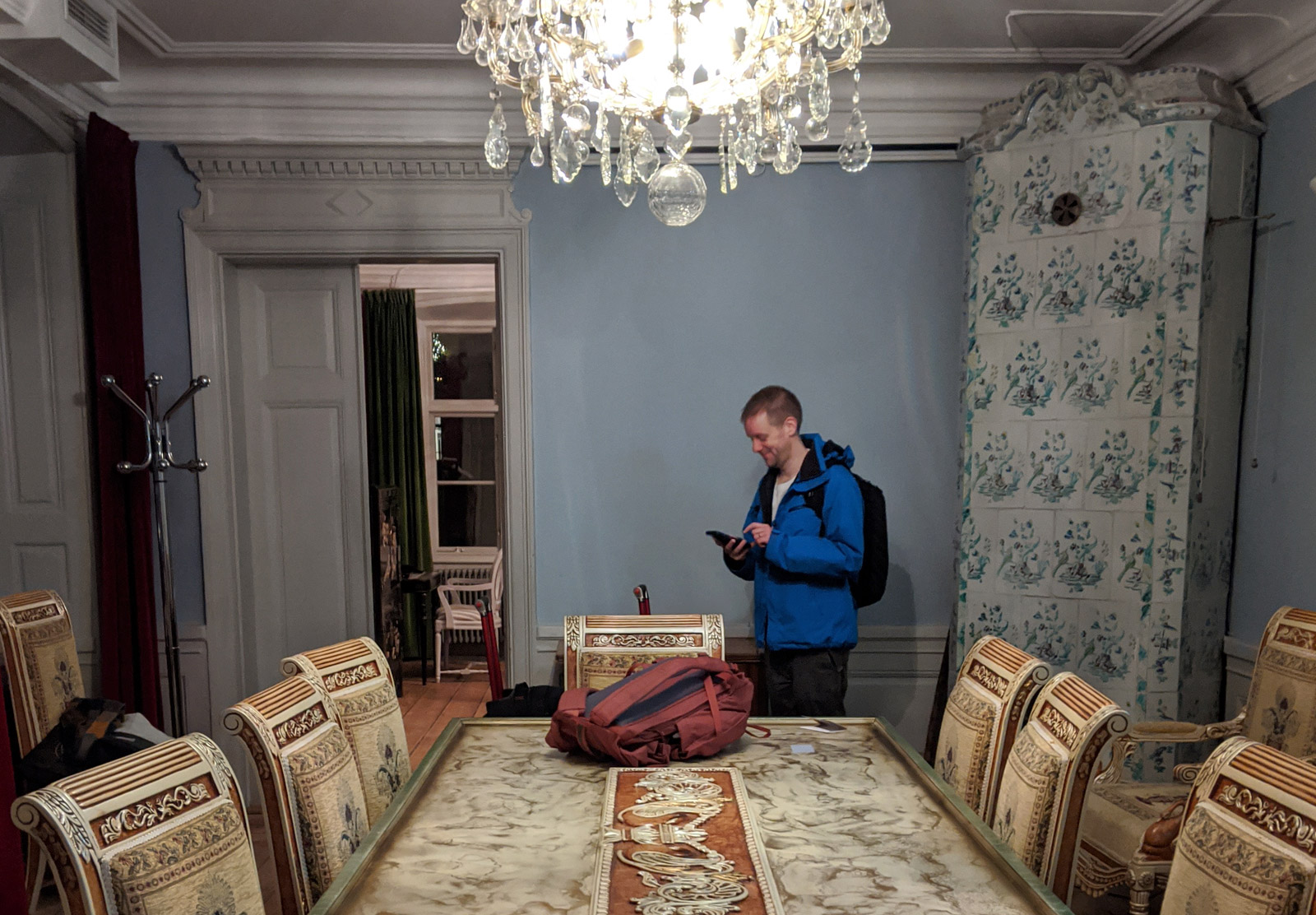 The fun began again the next day when we moved into a totally empty apartment. We bought a new blow up bed and unpacked our faithful sleeping bag from the UK. Some of our friends had sent us away with a food hamper — which was the first food in our cupboards on the day we got the keys. Then we were straight back on the life admin, this time on the Sweden side.

Luck was on our side again because the removals company were sending an extra lorry to Sweden, meaning we only had to wait a week (rather than 3-4) for our belongings to arrive. And more importantly, until we could sleep on a real mattress again.

I’ll be forever grateful for the people who cheered us on, encouraged us to be brave and happy, offered help, rehomed Rodney the avocado plant, and sent us away with cards and treats for the journey. 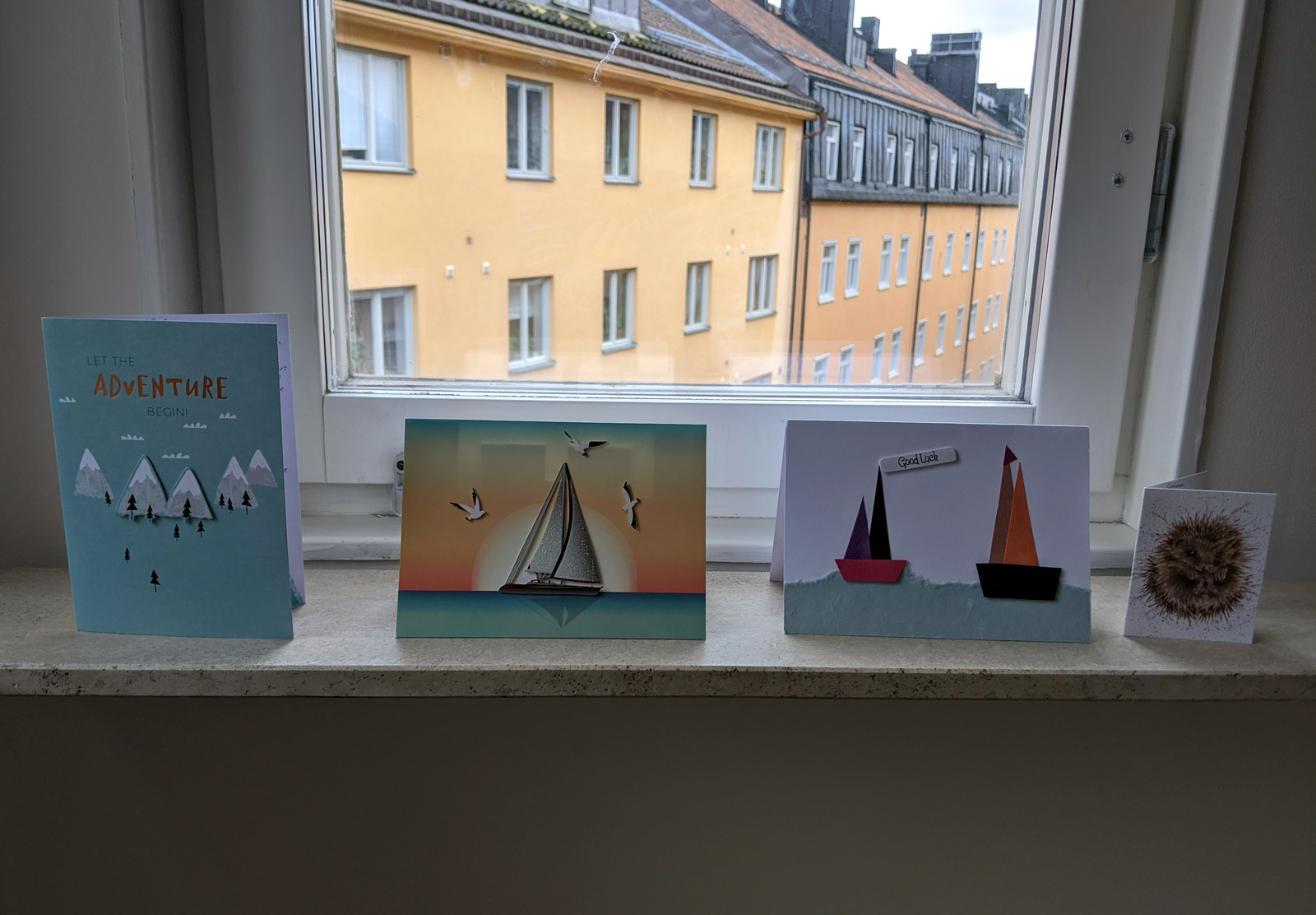 For anyone thinking about moving abroad who does not have support from those around them, I hope this post can be the encouragement you need. Carve out the life you want, have an adventure and don’t let anyone make you feel bad for wanting to be happy. Life is too short.

Twenty years from now, you’ll be more disappointed by the things you didn’t do than by the ones you did do. So throw off the bowlines, sail away from the safe harbour. Catch the trade winds in your sails.

Questions to ask yourself

A few things we talked about before making the final decision to move abroad:

If you have any questions or feel like you need a bit or moral support, feel free to leave a comment below. I’d love to hear about where you are hoping to move to 🙂

0 comments on “Moving from the UK to Sweden”